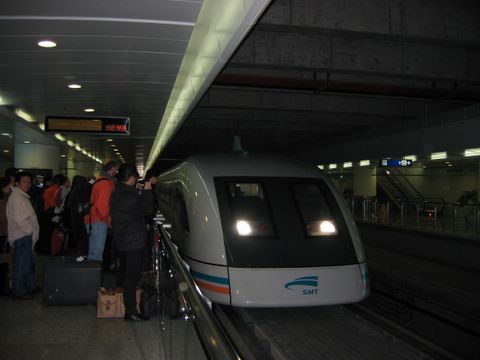 Shown here is the Maglev train in Shanghai, hailed as a marvel of engineering, and indeed it is. Yet due to some poor foresight by the city planners, Shanghai’s magnetic levitation rail system is completely useless.

The maglev was designed and sold as a way to cut travel time to and from Pudong Airport, which in a taxi usually takes about 90 minutes or so. On the maglev, it was and is still claimed, that trip would be reduced to seven minutes, by traveling at speeds of up to 435 km/hour (270mph). Sounds great, right? Except that the location chosen for the “downtown” station is nowhere near downtown. It’s in Longyang, which is still a good hour from the city center by subway. Which means that after you take the super-fast maglev (and pay the 50 kuai ticket), you then have to take the regular metro line or grab a taxi. We did it once, for the experience. Never again.

2 thoughts on “Maglev, wonder of creation”