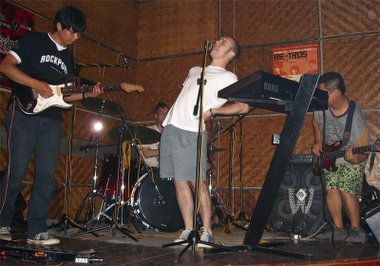 Wednesday night during the open-mic jamming at Tang Hui Zooma (left) asked me up on stage to sing our old favorite, “Red House”. Unfortunately, the bassist and drummer didn’t know Red House from a purple elephant and when they were supposed to come in they left Zooma and I hanging up there… and hanging and hanging. So we had to abandon it and try some random blues jamming. Which was ok for a while, but the rhythm section kept dropping the beat so much that it was just ridiculous. I was looking at Nate and Yam in the audience laughing their asses off every time the bassist and drummer went violently out of synch, and I just had to smile. And then they just wouldn’t pick up any signals from Zooma and I to end the song, so it dragged on and on and on… even when Zooma told them verbally, out loud, this is it, the drummer was totally clueless. It was the worst ending of any song, ever. I jumped down from the stage.

Luckily the others followed suit, and then I grabbed Nate and Yam and we hopped up there to make things right, launching into some jam tunes we know from some of our gigs together. Yam famously filled in for Knut when we played the AmCham Charity Ball last April and so he was spot on with all the tunes. Plus the guy is a total pro, and a “Hell of a Guy!” as we like to say. We received a generous round of applause at the end of our 15 minutes, and today Zooma called me to say he wants us to play every Monday at Tang Hui, in what he sees as a blues night, a “reviving of the 1950s, where people can dance and sing and shout, you know, Johhny B Goode and stuff.” The Blues are Back. Again.

2 thoughts on “Jam at Tang Hui”