We received the official letter from the Consulate, instructing Ms.P to return to their Guangzhou office anytime, “Monday to Wednesday, 2pm – 3pm”. Huge window there. So she has booked a flight for next Monday. I will stay home this time to save a little cash on flights. I really think this could be it.

It’s frustrating, though, because the letter, like the email, does not clearly say whether she will be granted a visa or not. I pointed out that we know for a fact any applicant who is granted an immigrant visa must be in Guangzhou in person with their passport to have it stamped, and then pick it up from the post office 1-2 days later. So that would seem to indicate she has passed. But she countered that maybe they have called her down there merely to retrieve the many documents of hers that they held onto, such as our marriage certificate, because they didn’t want to send them in the mail. Perhaps – but I think it would be awfully cruel of them to make her fly to Guangzhou just to be denied in person. I had hoped they would at least give us the truth in the mail and offer us the opportunity to pick up our docs in person or have them shipped.

But one can’t trust the immigration authorities to do anything one might consider civil or logical. After the ordeal one must go through to have his wife admitted to his own country – to have his rights honored by his own government, that is – one learns to withhold all the subconscious assumptions one would usually extend to normal social relations. In other words, one learns never to trust.

So that I may end on a happy note, here is a picture of us from a great party last weekend, taken by our friend, professional photographer Charlie Xia. 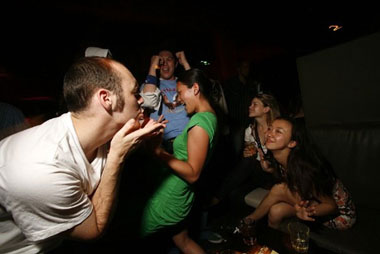 Visit Charlie’s site and hire him to do work. He’s awesome.

Meanwhile, we will be hoping and praying that our ship has come in.

One thought on “Going to Guangzhou”