“When people ask if I have health insurance, I say, ‘Yes, a plane ticket back to China and pocket full of change.'” 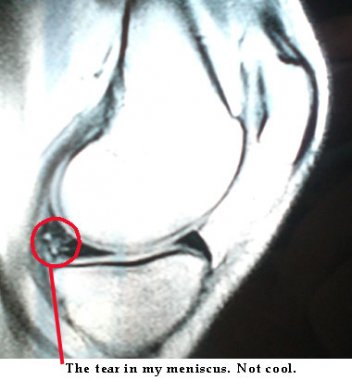 I went back to the hospital and spoke with the doctor. Turns out I’m going to need surgery on my knee, I suppose to remove some loose cartiledge or something. With not enough time to operate before my upcoming trip to the States, I’m probably going to have the surgery when I get back to China.

I called my dad to talk about options. He said the surgery would cost around $15,000 in the States! Meanwhile, here it costs RMB10,000 (about $1,250). Having no insurance, it’s well decided where I’ll have the operation.

Some have raised the issue of safety. The argument runs basically like this: how could you consider having surgery in China, a backwards, third-world nation? This argument doesn’t hold much water as far as I’m concerned, as the hospital I’m going to is one of the best in China and from everything I’ve seen, doesn’t differ much from my hometown hospital. The procedure, meanwhile, is minimally invasive and routine. It’s not like open-heart surgery, here. If I was going to do something serious, I’d want the best doctor in the world. But this thing is probably less dangerous than, say, getting your tonsils out.

The other option is to begin a physical therapy regimen, which may be able to “cure” me eventually. However, the amount of work and time involved is prohibitive, probably more so than just spending the money. Supposedly the healing time after the surgery is quick and relatively easy. So it’s just a matter of ponying up the cash, which hurts a lot more than my leg right now.

2 thoughts on “Surgery Called For”