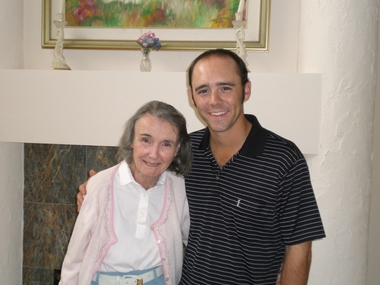 Sugar died last week. She was 85 years old, weak, stooped, and ready to go home. It was sad news, but after a few days with the big family, we all agreed it was for the best.

Her kids and some of their kids were all at Lissy’s house on Saturday, in a make-up birthday party for Shea (the party was planned for Sunday, but then Sugar’s wake would be Sunday). After watching my 3-year-old goddaughter open her presents, I sat down with my aunts and uncle and father to collect some thoughts about their mother. No one wanted to deliver the eulogy. Since I’m the one tagged as the writer in the family, they all spilled their ideas to me as I took notes, and asked me to write something up. When I left that night, it looked as if I might be the one giving the eulogy for my grandmother.

But in the end, it was Dad who stepped up. I was really proud of him for doing so. At the wake, everyone read what I had written and agreed that I had done a fine job. But I still didn’t want to give the speech. Not because I couldn’t, but just that I thought one of Sugar’s children should do it. The girls all were afraid of breaking down on the dais, and Uncle Drew just flat out refused, on grounds of fear of public speaking. So it was left to Dad, as it was left to him when his father died 15 years ago.

I sent him what I’d written, but he started from scratch and wrote his own account, just taking the choicest lines from mine. For that, I was honored. Later, at the luncheon, he said that my piece had given him a place to start, and it had helped him get through it when he was stuck. So I was glad to have played a part, but I was also glad that he had done it for himself, from the heart. It was a good eulogy.

Sugar was a gentle soul, always with a word of encouragement, who never held a grudge. She had a sweet little laugh, and she was prone to cute sayings like, “Lordy, Lordy…” She was a pleasure to be around, and a great conversationalist. She had traveled all over the world. I thought I was all cool for having lived in China; well, she had been there in the early 80s, and her telling of how all the doctors’ wives (they were in Beijing for a conference) were aghast at some of the things on display in the markets was always good for a laugh. Being the bargain hunter that she was, she naturally found a lot of good silk and porcelain over there.

In the last year her health had been declining. She was forgetting to eat and drink, and we had a nurse cook her meals. She fell down, and we put her on 24-hour care. All the while, we encouraged her to sell the house in Florida and move back to Jersey, but she was afraid of the cold, she was fiercely independent, and she repeatedly said she “would never be a burden on anyone.” She died peacefully, asleep in her own bed. Just the way she wanted.

Rest in peace, Sugar. We love you.