DeadPress combines my love of WordPress and the Grateful Dead. END_OF_DOCUMENT_TOKEN_TO_BE_REPLACED

There’s been a lot going on recently! END_OF_DOCUMENT_TOKEN_TO_BE_REPLACED

-Pastor Michael McBride, of The Way Christian Center in Berkeley, California, speaking in Ferguson, MO to DemocracyNow.org. I couldn’t agree more. The scene below is not one that belongs in America, or anywhere.

We were out on 4th Avenue yesterday watching the Marathon go by. Fun! 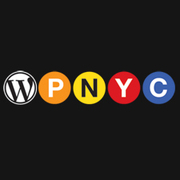 I’m speaking next week at the WPNYC Meetup group, talking WordPress to what will hopefully be a big crowd! I am super nervous and excited for this.

Last year I presented to this group for the first time, as part of a multi-speaker program on the WordPress Dashboard and setting up your site. But this is the first time I will present alone.

Specifically, my talk will be about WordPress sidebars and widgets. These are powerful tools when building your WordPress site. Come by and learn more about it 🙂

I heard about this from an Occupy email asking people to show solidarity by coming to a 6pm daily “vigil”. It sounded like a great reason to hop on the bike and ride down 5th Avenue about 30 blocks to Sunset Park.

I arrived to find a half-dozen Latino tenants, nearly all of advanced middle age, standing out on the sidewalk. It was a bit awkward as I asked, “Is this the rent strike?” I looked well out of place, rolling up in a mint-green lady beach cruiser, a gleaming white, brand new helmet atop my head. But I persisted, and a young lady who I learned later was not a tenant, but a fellow supporter, confirmed that I had found the right place. She was kind enough to fill me in on some of the back story while the other ladies conversed in Spanish. A man resembling a steam locomotive stood nearby, wielding a large plumber’s wrench with unknown intent.

The building loses electricity all the time, according to the tenants. They might have outages 30 times a day. They have a fuse box in the basement that is overheated and exposed. Apparently the super’s solution to this crackling, sparking fuse box was to point a fan at it. The landlord, Orazio Petito, is on the public advocate’s Worst Landlords list. In response, many of the tenants have stopped paying rent – some for a few months, some for over a year.

CBS Local reported on the story:

Notice the last line of the report: “The tenants say they’re going to save up their withheld rent money, and make the repairs themselves if they have to.”

That reminded me of a line Chomsky often repeats about sit-down strikes really putting fear into the owning class: “That’s just one step away from workers running the factory themselves.” As in, why do these people need a slumlord like Petito when they can just band together and administer the building themselves?

The best story I’ve found on it is by Laura Gottesdiener in the Indypendent. Read the whole thing to hear the story of these amazing women, but here’s a choice bit about the value of these actions:

The campaign’s bold words and actions have inspired community members not only to stand up for their rights as tenants, but also to reconsider social and political marginalization itself. About 80 percent of the neighborhood’s residents live below the poverty line, and the majority speak either Spanish or Mandarin as a first language. But in a society where immigrant women who speak little English are often bullied, intimidated or ignored, these women are loud, assertive and highly public about their right to live with dignity. And they are teaching others to push back as well.

The phone rang and the dialer was “16th Floor conference room”, which was immediately suspicious. I picked up. “This is Rindy.”

Ummmmmm… OK… I agreed and hung up. So this is it.

The new director of the division was there with HR when I arrived. That made it certain. I put on my best face, closed the door behind me and cheerfully said, “So what’s up? Bad news?”

“Yes it is, I’m afraid,” said the director. “There’s never an easy way to do this, but, as a result of the recent reorganization of the division, your position has been eliminated.” Bam.

A feeling came over me, equal parts relief and dread – but both tinged with nervousness, and my heart beat palpably in my chest. The director went on but I heard only my own thoughts. It’s actually over. I’m moving on. When I heard her again, she was apologizing. I smiled.

“That’s fine, I understand. It’s business,” I said. I was actually getting over the dread and becoming joyful. She had a brief look of confusion. “So, what are the details?”

They were generous. Not Dick-Fuld-golden-parachute generous, but fair. I said, “OK, that’s fair.” They both looked as if they had been expecting a much darker meeting. I had my keycard in my pocket and turned it over. They handed me some paperwork. That was it, I was free to go.

Although they intimated that IT had already commandeered my computer and deleted me from the system, my machine was waiting just where I’d left it, still running. I emailed a file I had been working on to a colleague and ran the disk cleanup function, clearing out my recycle bin, cookies and browsing history, temporary files, etc. I had already removed some personal photos weeks earlier.

Did I anticipate this? Not really. But I had decided to leave, and I had been looking. Getting a severance just made it sweeter.

There were some brief conversations of condolence and shock among a few friends – two others got the axe with me – and some of us went for a coffee after I packed up what little I kept in the office. I was still an employee for two weeks, but I wouldn’t have to come back.

Getting out of the subway at 77th St, I walked in the cold sunshine and spied a penny on the street. Nobody picks them up anymore, have you noticed? Including me. But I figured I’d need some luck now, so I bent down and picked it up, checking the year: 1983. What a great year! So many loved ones born in ’83 🙂

I am not kidding you: an hour later a recruiter called me. She had found me on Monster, and was I still looking? More than ever, I told her, and related the story. “Well, maybe this is good timing, then,” she said.

Three days later I met her for an interview, as a screening. We got along well, and on the way home – you are not going to believe this – I found another penny, also from 1983. This was incredible to me. I was confirmed to interview with a new company the following week.

That interview went very well, and do you know what? Outside the office as I walked out, I found yet another penny on the street, and this one was a 1980 – just like me! It was fate, I tell you. I got the job.

Three weeks to the day from getting laid off, I was starting a new job which in many ways feels like a promotion. It’s been a week so far and I am really enjoying it.

I need to thank my family and friends for being so great. Everyone reached out to me when they found out, everyone encouraged me. I have really good peoples. Thank you, guys. I love you.

{I am en route to Catonsville for a family gathering that is going to be great 🙂 This entire post was written from the bus via iphone, a first!}

Sitting in on a Friday night with Coltrane’s Blue Train on, remembering jazz, reading cheesecake recipes in a new bakery book I bought. You may have heard I lost my job a couple weeks ago. I broke the news to Mrs Portfolio with the following text message:

I just got laid off. Yes!

Truth is, I was ready to move on but too scared to cut the cord. And they came along and offered to pay me to leave. Although my heart beat quickly in that conference room, there was a smile on my face.

Two days later I wandered up to the Barnes and Noble on 86th St and walked by a book with a beautiful chocolate cake on the cover. The cake was small, sized for one or two. The book is about baking in small batches, with chocolate. I bought it.

A man on the tv tonight said the average American eats six pieces of pie a year. Is it me, or does that sound low?

I haven’t made any of these desserts yet, but just flipping through is enough to widen the eye. Coconut, banana, strawberry, cherry, macaroons, cheesecake, pudding, muffins. Every recipe has chocolate. Could be a nice way to spend my unemployment…