It has all come down to this.

Two weeks ago, Chuck Norris Fan Club faced its toughest match yet. We were down, 2 games to 1 in a best of 4 series, and with only one player left on the court, we were staring a virtually impossible to overcome 3-1 deficit in the face.

Fortunately for Team Chuck, that one remaining warrior was none other than Bulgarian Dodgeball Legend Yanita Karatchorova.

Facing six opponents, the odds were highly stacked against Yanita, and the fans of Team Chuck could feel the legend of 10 straight victories with no defeats was slowly evaporating from the air. But Chuck Norris had other plans.

In the most inspired performance in the history of the Shanghai Dodgeball league, Yanita channeled the power of Chuck Norris directly from his ranch in Texas into her very blood. Charging forward against all hope, she quickly laid waste to three of her enemies, including one of their biggest killers. Having nearly leveled the playing field, she wisely retreated to the rearcourt to dodge her opponent’s counterattack.

With missiles flying in from every direction, Yanita stayed strong and alert, deftly weaving her way between the incoming projectiles, until her enemy was nearly out of ammunition. Then, her enemy wound up with his one remaining bullet and hurled it at Yanita with all his might. Like a lightning bolt of pure Chuck, Yanita stood firm and pulled off what some had considered impossible.

She caught the ball.

The crowd erupted as CNFC’s star player, Jamey Harding, took the court after Yanita had decimated four of the enemy. With only two remaining, it was only a matter of time before she and Jamey cleaned up and evened the score at 2-2.

After such a momentous charge, the enemy was unable to recover and CNFC cruised to a 4-2 victory, extending their winning streak to 11 and keeping their title of “Undefeated for Life” well intact.

Declaring Yanita the Player of the Week was a no-brainer.

After a week of rest (reward for its position at the top of the league), CNFC tonight faces the Dirty Half Dozen in the semi-finals – and assuming all goes well there, either the Golden Balls or the Urban Cowboys in the final. Team Chuck has defeated all these teams in the past. But anything can happen out there.

Still, after all we have been through, having stared defeat in the face so often and come out victorious every time, I have every confidence that the Chuck Norris Fan Club will walk away with its second straight League Title tonight. 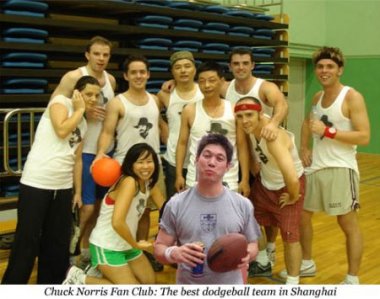 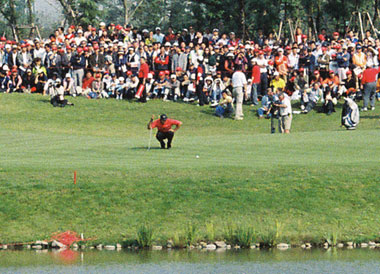 Chuck Norris doesn’t shower. He takes bloodbaths. And that is what the Chuck Norris Fan Club, Shanghai’s best dodgeball team, has unleashed upon the league since its creation last spring. CNFC is Undefeated for Life, an amazing run that includes one league championship (the first ever), and a run that was nearly brought to an end last night by the talented Golden Balls.

It was a tense match, with tempers flaring (as they always do when talented teams meet). The Golden Balls had CNFC down 3-2, but the Chuckers wrested victory from their opponents with a thrilling finish that featured a truly inspired performance from one Coley Dale.

It was a battle that brought back memories for Chuck Norris Fan Club. In the championship match last season CNFC was brought to the brink of destruction – yet survived. Though they trailed 2-1 and later 3-2, CNFC came from out of nowhere, much like their hero, to defeat their laughing foes and savor the sweet taste of victory.