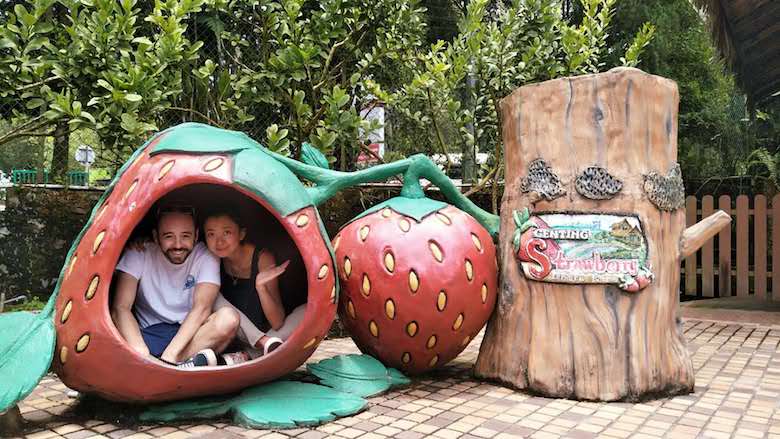 These last two weeks, we were excited to have our first guest stay with us in our new KL home: Cousin Dori from Chengdu 🙂

END_OF_DOCUMENT_TOKEN_TO_BE_REPLACED

I had kind of an extended Labor Day holiday, even without traveling or really taking off much work. Jarrett and Candice were in town and we used that as our reason to be out and about nearly every night for a week, exploring, celebrating, and having adventures.

The real purpose of their trip was Amy and John’s wedding, and as we have become friendly with the betrothed (we even live on the same street now!) we scored an invite as well. The ceremony and reception were held at the Jersey City Hyatt and featured the colorful dress and melodic chanting that mark an Indian wedding.

We went out for lots of meals together, including Roberta’s for lunch, and some snooty place that Jarrett wanted to check out, which ended up being quite good. Zack’s parents took us all out to dinner on my actual birthday, so that was a really generous treat. The chosen restaurant was Lincoln (under the grass field/art installation at Lincoln Center), which has glass walls. As Jarrett and I approached the entrance, I noticed Lloyd Blankfein and Jamie Dimon sitting together, drinking wine, I shit you not. I tweeted that out to #OWS, but alas, the masses did not descend. 🙂

The following Saturday, my wife threw a dinner party at the apartment with Piers, Rachel and my mother. That was really nice of her. I’m a lucky guy. 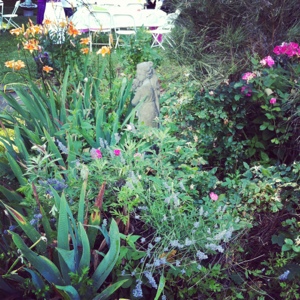 June 25th was a milestone birthday for Mom. We gathered all her sisters and their families, together with a couple of old college friends now living in the Midwest, and had a huge bash in the backyard. The garden was in full bloom and the lawn was lush. There was a lot of food, drink, and laughter.

Gia gave a heartfelt toast and we all partied into the night. Cheers to Mom!

Aunt Jeanne turned 80 a couple of weeks ago and I was there to watch her cut the cake. Happy Birthday Aunt Jeanne!

Mom and Gia were going down for the whole weekend, hitting up everybody along the way – Mary outside Philly, Katie in Baltimore – it was only a week after we came back from Thailand and I didn’t want to hit the road like that again. Xianyi had to study (of course – that’s how she gets those scholarships, baby!) but I couldn’t miss this.

So I left the house before six on Sunday morning and took the Chinatown bus down to DC – was there before noon and took the metro up to Silver Spring. Mom and Gia picked me up and drove me to the party. A few hours later they drove me back. But rather than go right back, I had other plans.

I skipped over to McGowan’s place for a while, and then Tuck picked us up and we went out to Clyde’s, a DC burger and beer institution. The irony is that, many years ago, while I was a student at Georgetown, Aunt Jeanne took me out for brunch at Clyde’s. This was a different branch though – they have clearly made a ton of dough, as this place is huge.

AND it’s right next to the Chinatown bus, so I was able to run over there right after downing my last beer.

Just as I was thinking how I was so clever and sturdy, pulling off a one-day bus trip to DC, the cold that had been latently hanging around all week hit me with full force. It was kind of a miserable ride back. I arrived in NYC Chinatown after 11 – and that’s not exactly home yet. At night, it seems, the PATH is always a half hour wait. By the time my sick ass crawled into bed it was nearly 1am.

I slept through my alarm on Monday and was feeling awful – had to bag work and sleep in. But I’d still say it was all worth it.

Words to live by. Today he would have been 68.

Thanks X, for a lovely birthday!

We went to the new Dali exhibition at MoMA, then walked to the Boathouse in Central Park and had a lovely dinner. Batman at IMAX had been on the original itinerary, but we bagged it and lingered for dessert.

More happy news: today we are going to Morristown for cousin Jenna’s wedding.

It’s high time I reported on the doings and misdeeds of the celebrations in honor of my 26th birthday almost two weeks ago. It was Saturday night, and a momentous convergence of huge excuses to party. Not only was it my birthday, it was also Christine’s, and furthermore, it was Natalie’s final weekend in Shanghai (for the foreseeable future, anyway). So we pulled out all the stops.

The evening began with about 30 friends gathered for a Sichuan meal around the corner from our house. The theme being “trash”, everyone was dressed in their worst gear. Except Imani, who incorporated “Eurotrash” into the idea, and was therefore sporting some fine threads. The meal was organized and coordinated by my wife, who did a superb job of ordering and keeping the waitstaff attentive and orderly.

Then, on to the lanes for a rollfest! We were all in fine form, having polished off a few bottles of baijiu during dinner, and were ready to engage in some thrilling athletics, such as this:

All in all a wonderful evening. Great time had by all. In fact, I think I summed it up best in this post-round interview with legendary sports anchor Ty McBenson (friend Sol).

Word. Now we’re off to the beach, folks. More on that in my next post…