On a quick stop to visit the parents over the May holiday, we played tourists in Tai Koo Li: 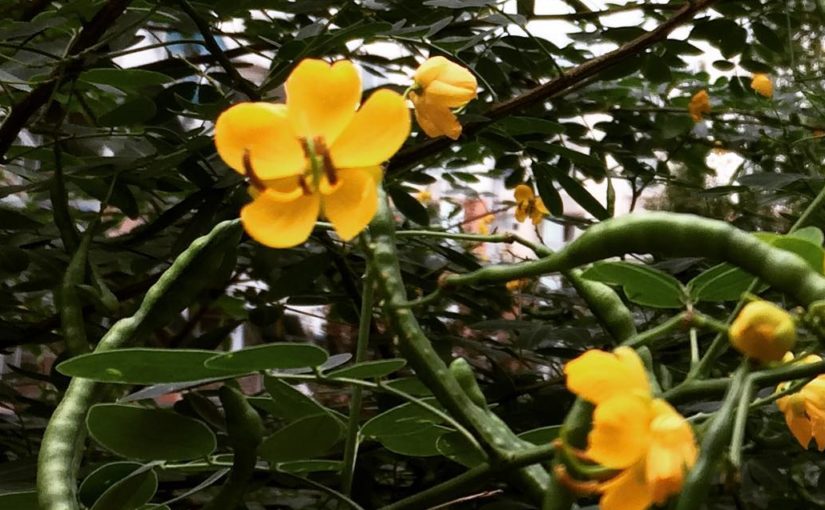 We visited Chengdu over October break, and nearby Qiang Bai Jiang, a suburb where X’s parents, aunt and cousin live. (Although for the moment, Doudou is away at college in the northeast). END_OF_DOCUMENT_TOKEN_TO_BE_REPLACED

Mrs P has been back in China for a few weeks now, and I’m getting pretty lonely 🙁

But she is having a great time with the family, speaking Sichuan-hua and eating Mom’s food again, and that makes me very happy 🙂

Also, something amazing happened. Listen to what she wrote:

There is something miracle happened to my home. 11 years ago, my mom bought a plant is called Widened Microsorium, it had bloomed once at the time, and then never since. After 10 years, just a few days ago, that plant has blooming again, and the unique color combination and elegant shape caught my parents attention immediately, and they believe is because I’m coming, therefore luck forces rare flowers to bloom.

All week, we’ve been doing little besides eating, sleeping and reading. I finshed one book and started another. Xianyi has been in a blissful mood for days as she constantly feeds on her mother’s cooking. And this little computer and wireless internet are keeping me from getting too bored in between meals and naps.

One of this year’s blessings has been the weather: Chengdu is pleasantly warm and dry. The first year we visited Xianyi’s parents for Chun Jie (2004) was a cold, wet nightmare. It rained every day. The cold was biting, especially since they don’t have any heat except for an electric blanket. In fact, the following year, they bought a space heater just for me because it was obvious how miserably cold I was the first year. And I used it all the time, though it didn’t help much. But this year, it’s been great.

Despite the warmth, however, Xianyi’s mom still implores me to “Chuan yifu!” (put more clothes on) every chance she gets. And her life comically revolves around food. Her last words before going to bed every night are, “If you get hungry, boil some eggs.” One night, after she had retired and we were still watching TV, she called out from the bedroom, “Are you guys hungry? I can make you some rice.” Her food is delicious, though. And she certainly can’t be blamed for her food-centric ways; as a child, she was poor and food was a constant concern. Not an uncommon thread in China.

The other night we went out to see Dan and Tenzin, though we only caught up with Dan. He has been DJing at a local club, which, as it turns out, was one of Fang Bian Mian’s stops on the infamous Tour. It has been completely re-done since then, however. When we walked in, the first thing we saw was Dan at the controls:

Besides us and about 50 staff, the place was dead. Such is life on the Tour. The manager, Nick, introduced himself and showed us around his very large, very nice, and very empty nightclub. We had a drink, chatted a bit with Dan, and came home.

Spring Festival is upon us, and so the Portfolios have embarked on their annual journey back to Mrs.P’s roots in Chengdu.

2007 is the Year of the Pig, and it is a special Pig Year, in that it bears the additional quality of being Golden. This makes it a twice-per-century event, and that means only one thing in China: people are lining up to get married and have babies. The pig is already considered a prosperous zodiac sign for a child (perhaps because healthy babies are fat? or maybe pigs are perceived to have good lives because they just wallow around content all day?), so the added Gold status just makes it even better.

Mrs.P happens to be a pig, so this is her year. When I first learned about the Chinese zodiac, I assumed that this was an auspicious thing; in fact it is the opposite. When your year rolls around, you are supposed to be wary of evil spirits. How do you fend them off? By wearing red underwear, of course.

We arrived in Chengdu around dinner time yesterday. The city looks much the same as I last saw it a year ago – in fact, it looks much as we left it when we moved to Kunming in 2003. The only major distruption to the cityscape we noticed on the ride from the airport was the massive construction on Renmin Lu, where they are building Chengdu’s first subway line, to be completed… someday.

Mom and Dad had dinner prepared and we pretty much got right down to eating and drinking. Dad and I had fiery baijiu while the ladies sipped orange drink. It was a sumptuous feast of all Mom’s specialties: cold spicy chicken, twice-cooked pork (???), fish, various vegetables only available in China and hence lacking English names (to my knowledge), ??? (basically pork fat laden with sugar and sweet bean sauce, which sounds kind of nasty on paper but which tastes like sweet heaven), and my personal favorite, bamboo with fried beef.

We had planned on going out to the temple at midnight to pay our respects to Buddha, but we were too tired and went right to bed.

Today Xiao Niang (Mrs.P’s aunt) and her daughter Dodo came over to hang out with us. They live in what might be called a suberb of Chengdu, QingBaiJiang (Green White River). Doudou is ten now and much taller than when I saw her a year ago. We brought some clothes for her, including my old Superman sweatshirt. We also took her out to the Metro hypermart and bought her a new jacket (as well as one for me). She also bragged to us about how she came in the top five of her class, despite her teachers telling her she was a bad student. Ha!

*This post made possible by a generous loan of his old computer and wireless internet card from my boss. So despite the in-laws having no heat or a/c, and a squatter toilet that doubles as a shower drain, I am still surfing the net. Yeah, baby!