Happy New Year to all!

Mrs Portfolio and I moved into a new apartment for the new year, on the Upper East Side of Manhattan! Emphasis on east, but hey, we love the place and are really excited to be in the city after three years across the river in Hoboken. I’ll post some pics soon. Pull-out couch is available to friends swinging through town 🙂

Hung out with some friends yesterday watching football. I am further convinced that the Packers are going to win the Superbowl on the back of Aaron Rodgers. It really is looking like his year. The story of how he was passed over in the draft six years ago provides some great perspective on what is driving him. It’s going to be a great game against Evil Rapist Big Ben and the Steelers…

In other family news, Will finished just one shot out of the money in his latest effort on the Florida Professional Golf Tour. Hang in there buddy! Check out Will’s new blog for updates on his season. And Gia has a new blog too! Wow, Portfolio Family blog network!

March Madness is back. Having disconnected the cable about a year ago, I had to trek out to the local watering hole to catch the Big East final between my Hoyas and West Virginia last weekend. It was raining something spectacular, and Xianyi and I were hanging at home. I said, “Well, I’ve gotta go watch this game. I’ll be back in two hours.” Wherein I proceeded to one of the many shitty bars that I despise, alone, and sure to run into no one. It’s literally 45 seconds away, and I was drenched when I got there.

Georgetown lost on the final shot, which was some kind of miracle thrown up in desperation, and maybe the ugliest winning shot of any game in the history of basketball, but whatever. We have more Big East trophies than any other team, and this was the first for the Mountaineers. So, well done. Now we move onto the Big Dance.

So Tiger’s coming back. Everybody knew he’d never miss the Masters. But why no warm-up tournament? I gotta think Arnie is a little miffed that Tiger won’t be at Bay Hill. My theory is that Billy Payne and the Augusta whitebreads will enforce a strict zero-sex-questions policy in the press tent, and employ plainclothes officers to follow El Tigre around the course from outside the ropes, ready to make an example of any “patrons” who wanna get cute.

The world of Tiger Woods is falling apart, his reputation is dinged and he may end up paying lots of money to one or more women – but at least one good thing has resulted. This is the end of the Church of Tiger Woods movement.

Seriously. You didn’t know about www.tigerwoodsisgod.com? The First Church of Tiger Woods, where they rejoice in “the emergence of the ‘true’ messiah”, was recently renamed by its Pastor, “The Damnation of Tiger Woods.” There you can find several long posts directed at Tiger from the Pastor, who founded the church back in 1996 but has now decided to disband it, on account of Tiger’s Transgressions.

… you might think that such a decision might be difficult. In this case, it was not. Unfortunately, Tiger Woods has made it all to easy to realize that he is no longer worthy of any special admiration.

Check it out soon, because the Pastor won’t be renewing the domain. My favorite part is the photo captioned: “Proud Father looks on as Tiger Woods wins the Masters.”

With the sun setting early now that daylight savings time has ended, I’m reflecting on my recent trip to Italy.

I was lucky to receive an invitation from my good friend Andreas. He is an aspiring professional golfer, and had reserved a space in the qualifying tournament for the European Tour. Stage One was a series of 4-round tournaments, and ours took place in a little town called Bogogno, near Milan. Andreas offered to pay my airfare and hotel for the week in exchange for caddying for him during the tournament. How could I say no? END_OF_DOCUMENT_TOKEN_TO_BE_REPLACED

Thanksgiving weekend was nice, despite some mild drama (par for the PortFam course at the holidays). We drove out to PA and stayed with the Violas, who cooked up a feast. Gia and Mom were there, too.

The food was excellent, as usual for a meal from Uncle Steve, although dinner eventually devolved into an argument over politics and other nonsense – and things only got worse afterwards, when some miscommunication led to rather heated exchanges. END_OF_DOCUMENT_TOKEN_TO_BE_REPLACED 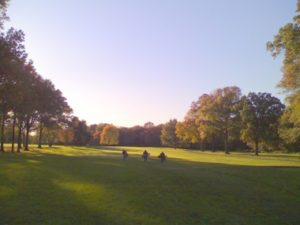 The annual golfing tradition known as Pros vs. Joes took place recently, and it was not pretty for the Joes.

The pros – Pete and Remy – were looking to avenge their losses in the first two installments of the Fall Finish last year, when Johnny cakes and I destroyed them twice – first at Hackensack, then at Ridgewood.

One of the benefits of being a looper is that you can play top notch courses for free, by virtue of your friendships to the people who run these places. When the fancy clubs are closed to members, there are opportunities for the workingmen to enjoy themselves on the fairways and greens.

This time, sadly, it was more often the rough and the sand for me and my partner. It started off with a bad sign: I lost an entire brand new sleeve of Titleists on the first hole. Two in the water off the tee, and a third, dropped behind the pond, also failed to clear the drink. All day, the Joes won 2 holes, I think. The final verdict was a $36 dollar defeat.

We had a beautiful day for it, though. Late October, leaves changing color, a crisp breeze but sunny skies that meant the sweaters could stay off most of the day. Afterwards, three of us went down to the Hudson Tavern for a kingly feast. The pros were gracious enough to pick up the tab.

Team Portfolio was this close to qualifying for the US Amateur – we were right there through 32 holes – and then, nuclear meltdown.

I have to take some responsibility. In my many years of caddying, with so much riding on the line, I have never made such a boneheaded recommendation as telling Will that 5 iron was the club on the 15th hole.

The problem was my notes. See, Will had almost missed his practice round by driving to the wrong Trump National – he went to the one in New Jersey instead of New York, and so he ended up getting in only 14 holes that day. Hence I was filling in notes during our morning round because it was clear we were going to be around in the afternoon – unlike last year when we got cut at lunch and I went back to Hackensack and caddied for Jim McGovern who shot a heavenly 61 that day.

So when we came around to the 15th that afternoon, just coming off a birdie at 14 and just 2-over for the tournament, club selection was crucial. We were looking at a par-3 playing about 176 with water on the right. Looking back, it’s obvious that 6-iron was the club. The problem was, he had hit 5-iron in the morning and ended up on the fringe a little back of the pin. I was looking at the notes, thinking, we hit 5 this morning, let’s hit 5 again. Well, either there was some wind in the morning, or Will didn’t get all of it, because the 5 in the afternoon sailed over the green, hit some branches, landed on a cart path and jumped out of bounds, effectively ending our run.

Will then hit a provisional ball into the water. We went and looked for the ball and found it OB. He dropped in the drop area and hit a bad chip. Then he 3-putted for an 8. Then he was so pissed he lost his drive right on the next hole. Then he went for the green with a 3-wood and hit it in the water. It was awful to watch. He took another 8. How many back-to-back eights do you see out there?

The funny part was that he had makeable birdie putts on the last two holes and missed them both. He took an 83 for the afternoon, signed his card and we went directly to the parking lot. That was that. We later found out that +3 made it into the US Amateur. He was +2 through 32 holes! We were crestfallen.

The whole drive home we were thinking: what were we thinking? Why did we hit five from 176 out? One reason was the notes. Another reason was that Will was hitting five into almost every green, and he was hitting it damn well. So when we thought it was 5 on 15, we were like, we love 5-iron. It was groupthink on a small scale.

I mentioned to Will that eight is a lucky number in China, and that two eights together were especially auspicious. He said, “Really?” with a note of optimism…

On the Saw Mill Parkway, driving home, we saw a terrible accident involving a burned-out, flipped-over car and miles upon miles of people backed up in traffic. I don’t know about Will, but I was thinking there’s more important things than golf, even if it doesn’t seem like it sometimes.

And we still have the club championship. Wouldn’t it be awesome to be club champ at 20? First match, 9:08 tomorrow morning.