It is now 6am in Guangzhou. Her visa interview is in exactly one hour and fifteen minutes. We are staying across the street from the American Consulate in the Grand Palace Hotel, which is comfortable enough and offers internet access…

We left yesterday morning, early, and now we’re up early again. Not looking forward to waiting outside the consulate, as Guangzhou is not as warm as it usually is, and yesterday was raining, so I’m worried we’ll be huddled under an umbrella for 3 hours before we can get inside. Even though our appointment is for 7:15, I have heard that a line forms outside and doesn’t move for hours. We plan on eating light, bringing snacks, and showing up early (like right after I finish this post).

We are excited, not nervous; we are excellently prepared. I have extreme confidence in her ability to sail through the interview and come out the other side with that stamp in her passport. And certainly we’re both looking forward to completing this chapter in the immigration saga and moving on to the next step. Wish us luck!

Folks, this is it. The one we’ve been waiting for.

After months of stalling and strage emails/phone calls/faxes, we’ve finally got word:

Just a couple of weeks ago, I was writing the consulate at the email address they had provided me to see if they could give me an estimate on when the interview would be. The email bounced. Checking their website, I found an online contact form which I used to ask my question. Five days later I got a message saying that my question could only be answered on the phone – even though the original letter I received from them said it could be done over email.

I called the number (which required using the final 2 minutes of my prepaid phone card, a special card JUST for calling the visa section of the consulate, which you can only purchase at a specific bank, and asked my question, adding, “Please hurry, before my time runs out.”

“They are running a background check on your wife.”

“And how long does that take?”

“Is there any former experience you have that could estimate for me how long a typical background check takes?”

And that was that. So I figured we were in it for the long haul. Then last weekend, while she was back in Chengdu on business, hanging out with her parents and eating her Mom’s food again, I was laying on the couch in Shanghai watching a movie when the doorbell rang.

“Ni you kuai jian,” the doorman told me, and I wondered, Who has mail delivered at 8pm on Saturday night?

Only the US Government, I suppose. Victory is within our grasp, dear readers. Wish us luck.

Things have been real busy lately for the Portfolios. Here are a few random updates to keep our slowly growing list of readers in the loop:

Basically, it takes serious determination. Our experience has taught us that the US has a purposely Byzantine system of application for an immigration visa specifically to weed out those who are not full-throttle determined to get one. And really, you can’t blame the US. Just look at all the people trying to get into the country every day.

I neglected to mention it, but last month we received a package from the US Consulate in Guangzhou, where they process all the immigrant visas. They had received our application via Beijing (where it had been approved) and therefore had sent us “the next step.” See, information in this process is given out on a need-to-know basis, and until you reach any given step in the process, you don’t need to know about it.

So, we get the package and it’s full of papers, one of which is an “application for immigrant visa.” Forgive me if I thought we’d already filled that one out and had it “approved.” With it is a list of documents which we are to procure, including Yoyo’s birth certificate, passport, and something called a “police certificate” which basically asserts that she has never been arrested. But the wording is not clear on that and we weren’t sure whether she needed only one certificate, or one from “every locality” in China, or just one from each place where we had lived for more than 6 months. A call to the Consulate (for which one has to pay $6.50 for 12 minutes, including time spent answering questions by pressing numbers) gave no answers, as the woman on the other line kept saying things like “I think…” until I had to blurt out, “Is that what you think or is that the real answer? Because I’m not interested in what you think. I need to know the truth.”

Luckily, when we received the police certificate from Chengdu, which was procured by Yoyo’s parents (as were the rest of the docs, bless them), it stated unequivocally that Yoyo “has not been arrested in the whole of China through September 4, 2006.” So that seemed to clear it up.

This week I went to the Consulate to have my “affadavit of support” notarized. This is a crucial part of the application, as it seems the number one worry of the government is not that the immigrants it allows to enter the country will become terrorists, but that they will end up on welfare. The affadavit is therefore a way for them to reduce this risk by legally obliging me to take care of Yoyo (which, as her husband, I believe I already am. But not all immigrants are spouses…) I actually had to raise my right hand and “swear or affirm” to support her! Well, if that doesn’t get her into the country, I don’t know what will. Maybe we’ll have to go with Sascha‘s plan…

“Man, just bring her into Canada and take a dinghy out into Lake Superior. I’ll meet you there at midnight. No customs, no red tape, no problem.” 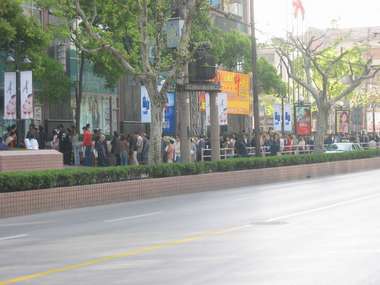 Above you can see the reason that it takes so long to get a green card or a visa to America. This is the line of people waiting to apply for one or the other outside the US Consulate in Shanghai this morning. This line is there every morning. The people just keep on coming.

As an American citizen, I do not have to wait on this line. And my wife is guaranteed eventual success in her bid for a US green card, unlike the majority of the people pictured above. However, because so many other people are married to Americans and waiting for green cards, there is a bureaucratic backup of approximately one year. Attention loved ones: this is a major reason I do not know when I will be returning to America. Please, for the love of God, stop asking me.

This morning I successfully filed the Petition on Behalf of an Alien Relative for Permanent Immigration to the US. The cost was $190 and many a red-tape hurdle. In fact, I should have filed it yesterday, but when I showed up to do so, I was presented with a brand new list of required documents, about half of which I did not have. So I had to come back today. And even though every document I’ve seen for the last year in my research, including the one handed to me yesterday, has said that the fee was $185, when I showed up today I was told that the fee had been raised. When I asked them if it had changed overnight, they said it had changed months ago. Why, then, was I given incorrect information just yesterday? “Oh, ” said the clerk, in a tone that suggested I should know better, “they never update those forms in Beijing.” It seems the Chinese method of bureaucracy is rubbing off on the American embassy. “Besides,” she continued, “it’s only five dollars.” I wanted to smack her.

We have a theory, one which is shared by many other applicants, that the US government purposefully makes it as difficult as possible to obtain a visa so that many people will be put off by the whole thing and just give up. By making would-be immigrants jump through hurdle after hurdle of red tape, getting these documents, filing these forms, paying those fees, they will weed out thousands of people who just aren’t persistent enough to keep up, and thereby lighten their own load of paperwork. It makes sense. But it doesn’t really work. In China, there is no possible way the US government could design a course strenuous enough to put people off. Not a people who have seen 50 years of mind-numbingly ridiculous bureaucracy become the standard form of government. And it clearly doesn’t work in Latin America, either.

One other funny note about today was the amount of chops the Consulate used on all my forms. I swear, with the amount of stamping, inking, sealing and signing that was going on, I thought I had accidentally ended up at the Ministry of Adoption.