We had a great start to the holidays a few weeks ago when the friends began arriving in town. First Dave dropped in for the weekend, and we had two nights of drinking and discussion, and even some dancing. Dave and I have been talking about an app, an idea for a business, which we have been stalling on, and hey, maybe 2012 will be the year…

Then Jarrett and Candice dropped in, and pulled some old Kent boys out of the woodwork for an evening, as well as the China Contingent. Several good dinners and parties (including KTV at “the best bar in NYC”) leading into the week of the main event.

Thanksgiving was a blast at Aunt Jo-Rose’s, as always! Tons of good food, and wine flowing with conversation. Gia was out in Kansas, and Will was in Florida, but I spent some quality time with Piers. It was great to see Shea (who talked to me and X more than ever, though still dour and serious) and Viv (who is so much bigger than last year). Poor little Vivian fell asleep on the floor while coloring a picture, marker still in hand, scrunched up against her face.

We said some quick goodbyes to make the train on time, and didn’t end up partying overnight like last year! Back at Penn Station, we decided to walk across town, and wouldn’t you know it, with all the bargain shoppers hustling by, we ended up shopping in the first hour of Black Friday. Good and drunk is one way to make shopping tolerable, but one should always have the benefit of a woman’s good taste as a guide.

The Mrs and I took a walk to the Guggenheim this evening (pay anything Saturdays after 5:30pm) and saw a stunning display. Maurizio Cattelan’s “All” involves 130 different sculptures and oddities – artwork which he produced over his lifetime – all hanging in the main atrium by rope. There are bodies, horses, Hitler, the Pope, Picasso, police officers, businessmen in bed, children hung by their necks. It’s all pretty creepy and disturbing, to be honest. It’s a mish-mash. But we liked it. And when I read that the artist is “retiring” with this display, I understood it better.

Now she’s out having a drink this Saturday evening, and I’m sitting in eating leftovers from the brilliant chicken-and-mash dinner she made last night, watching Notre Dame get its butt whooped by Stanford, listening to the new album from Real Estate, my new favorite band, … from Ridgewood, NJ!

X and I celebrated the Chinese New Year last weekend with two days of feasting. On Saturday, we took the long train out to Flushing for the first time to see the Chinese community out there. What an excursion – it takes over an hour to reach Flushing on the subway. When we arrived, we checked our info and started walking along Roosevelt Ave, looking for a specific restaurant: Xiao La Jiao (Little Hot Pepper). We walked for like 20 blocks looking for the place in the freezing cold, only to reach the end of the street without finding it. A phone call to the restaurant told us that we had gone all that way in the wrong direction. Sweet.

So we walked all the way back, and it turned out that the restaurant was almost right outside the subway station. Seems that the address X had pulled off the net was wrong – perhaps user-submitted.

Anyway, we sat down and ordered a huge pot of ma la yu – spicy fish. There was enough food there for five or six people, though it was just the two of us. We took it home later, froze it, and X just finished the last of it yesterday.

Sunday we met up with some new friends for lunch in midtown – Sichuan Express. There were four couples in total, all people that passed through Shanghai at one time or another. Some of them we’d met over there, some here. One couple brought their four-month-old baby boy. We shared a big hotpot meal and toasted to good luck in the new year.

Thanksgiving weekend was nice, despite some mild drama (par for the PortFam course at the holidays). We drove out to PA and stayed with the Violas, who cooked up a feast. Gia and Mom were there, too.

The food was excellent, as usual for a meal from Uncle Steve, although dinner eventually devolved into an argument over politics and other nonsense – and things only got worse afterwards, when some miscommunication led to rather heated exchanges. END_OF_DOCUMENT_TOKEN_TO_BE_REPLACED 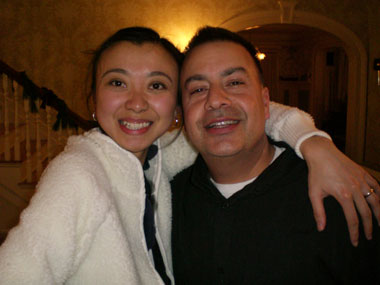 For months, I’ve been telling Uncle Bob he’d get on the blog – he has been a loyal reader since day one and so now here he is! This shot is from Christmas, where we had another wonderful time at Jody and Mark’s (where we’ve been staying since October) with the whole Kellow clan.

It was a mad rush of travel at the end of the year and into 2008. We were in Cleveland for Tristan and Caroline’s wedding party, I went to London for my new job while Xianyi stayed with friends in NYC, and recently we were down in DC to watch the Hoyas absolutely THRASH the Fighting Irish, stayed with Joe and Mary Beth and even saw Boom and Jane for brunch before peeling out and making it to Mom’s in time for the Giants-Packers game – what a match!

As we wind down the first month of the year, we’re achieving a new milestone, but I’ll save that for its own post…