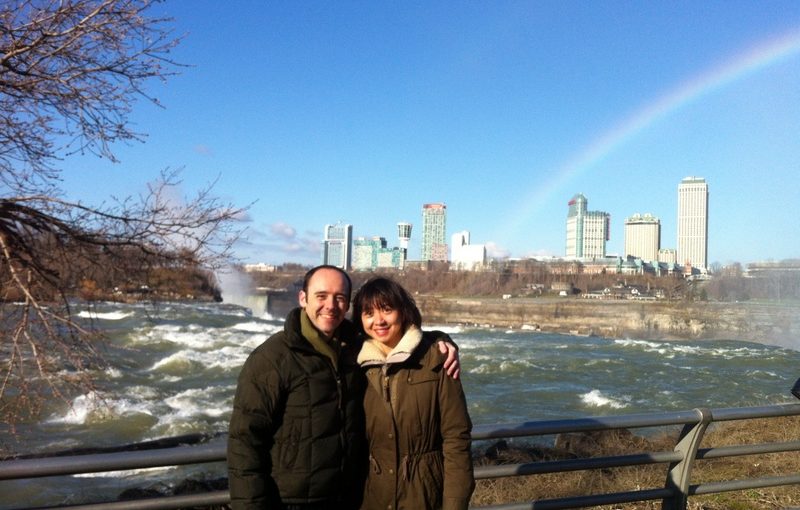 We finally took that trip to Niagara Falls that she’d been wanting to do for so long. “You have never taken me to any American landmarks,” she would remind me. “What about Washington, DC?” I said. “We got an insider’s tour of the Capitol!” “Yes, and then you took me to an awful ‘diner’ for dinner. Some trip!” Well, she was right about that – but I digress.

Off to Canada we went, by way of Buffalo. A friend from the WordPress NYC Meetup gave me some great advice, which we followed exactly. Having landed in the city which gave the name to the famous wings, we got our Zipcar (that was another story – Zipcars aren’t at the airport, but at the University at Buffalo – when we asked the lady at the information booth if there was a bus that went there, she offered to give us a ride herself as it was the end of her shift!) and drove straight to the bar that created them: Anchor Bar in downtown Buffalo, right on Main Street.

The area is gritty but proud, and some of the buildings look historic. They have that solid, old feeling to them. A giant cathedral, the St. Louis Church, is right nearby. Inside the bar, there are license plates all over the walls and full-size motorcycles in the rafters. The place is awesome.

Obviously we were going to order some wings, the only question was how hot and spicy? We opted for the extreme version: “suicidal.” To be honest, though, they weren’t really that hot. I mean, nothing compared to an authentic Sichuan meal. But they were delicious. And the ambiance of the place really added to it. Besides the wings, I remembered what my friend had told me and ordered the “Beef on Weck” – a roast beef sandwich on a kummelweck roll, which was also tasty.

Fully sated, we packed back into the car and drove over the Peace Bridge into Canada. This allowed for a scenic drive up the Niagara Parkway, along the river, rather than taking the expressway. The customs guy was serious but polite. The weather was gray with light rain, but the river was still beautiful, and lined with nice houses where Canadians could look out on America from their front porches – albeit, not much of a view.

We arrived at the Bed & Breakfast my friend had recommended, Ambiance by the Falls. This charming place is run by Scott and Diane Gerrits, a very nice Canadian couple originally from Winnipeg. Scott had emailed me right after I booked online, and he was there to greet us when we arrived. After we settled into our very comfortable room, he gave us the lowdown on Niagara, what there was to do, and how to get around, and we set off to explore.

From Ambiance by the Falls, we walked along River Road, approaching the falls from the north. Passing under the Rainbow Bridge, we first caught sight of the American Falls – as I learned, there are actually two waterfalls that constitute Niagara, and this is the “small” one. We laughed at how this majesty is totally upstaged by the Horseshoe Falls (the classic image of Niagara). Anywhere else it would be considered grand in its own right, but here it will forever play second fiddle.

Continuing on our way, we arrived at the Horseshoe Falls. She got a really good picture of the drop. Just standing there listening to the roar, I was overwhelmed by the power, and hypnotized by the rushing water. The water just kept coming. Where does it come from? When will it stop? How much water just keeps running and falling and crashing down? It was amazing.

Following Scott’s suggestion, we purchased two “Magic Passes”. This is like the all-in-one tourist package, which gets you admission to the Journey Behind the Falls, the Butterfly Conservatory, and The Power of Niagara, as well as a few days’ access to the tourist bus system. We sat at the bar that overlooks the Horseshoe Falls and just took it all in over a drink, then attended The Power of Niagara, which is billed as an interactive experience of the creation of the falls. It was kind of lame, but hey, we were doing our tourist thing. The kids in our showing seemed to enjoy it. Basically you watch a cartoon film that goes over the whole carved-by-glaciers story, to get the background. Then you step into an immersive studio set, with a 360-degree screen and a steel platform that you stand on. There are no seats, but bars to hold onto. The floor moves and shifts, and rainwater and “snow” occasionally fall down upon you (they provide you garbage-bag ponchos), as you watch some kind of Nature-channel scenery of glaciers, earthquakes, roaring rivers, etc. Before you can figure out what it’s all supposed to mean, it’s over. Exit through the gift shop.

We had a nice dinner at a place that Scott recommended, the Sandstone. It was kind of a casual but classy joint with a nice ambiance and a guy on the piano, and we had a good time and a good meal, and the owner came by to chat. He’s been running the place for 25 years, took it over from his in-laws, and when we mentioned that Scott had told us to come by, he sent over a free tartufo, which was really nice of him.

The next day we took full advantage of the Magic Pass, but not before being treated to a magnificent breakfast by Scott. We started with yogurt, granola and fresh fruit, with homemade blueberry muffins (we’d brought a bottle of champagne as well). Then, wearing his white chef’s smock, he served us western omelets, mine with cheese and hers without. Beautiful! And with a fresh pot of coffee, too. 🙂

Fully energized, we headed first to Journey Behind the Falls. This involves walking around a series of tunnels that have been dug out of the rock, literally behind the Horseshoe Falls. You can walk right up to several openings where the water is just rushing over in front of you. Of course it’s really loud, too. The best view, though, is one tunnel exit that is off to the side of the falls, giving a close-up view from near where the water lands. It’s quite a powerful sight:

Before you enter the Journey, they snap your picture in front of a green screen, and when you come out they have classic Niagara souvenir photos waiting for you (for an additional fee, naturally). They put you right in front of the falls – as if you were hovering over the water – and even give you both the day and night views. Because it was cold and rainy and I was a bit unprepared for the weather, I was wearing her scarf wrapped around my head when they snapped us, and so our trip will be forever memorialized in this ridiculous fashion:

[Removed out of embarrassment]

The Journey completed, we took the bus to the Butterfly Conservatory. This is a nice little hothouse full of butterflies! They are flitting every which way, all around, and we snapped photos of them and tried to get them to land on our fingers – no luck. They also happened to have a snake exhibit going at the time, and we were treated to an up-close view of a baby python.

We returned to the B&B to get our car and drove up to Niagara-on-the-Lake. We had heard about this quaint little town both from Scott and Diane, and from the nice lady who had given us a ride from the airport. It’s at the mouth of the Niagara River where it meets Lake Ontario, and has the feel of a small artists’ community. There’s a lovely old building called the Prince of Wales Hotel, tiny boutique shops lining the walkable roads, and cute lake houses along the shoreline. We had a heart-stopping moment when I appeared to have locked us out of the Zipcar – somehow all doors were locked but one, crisis averted – and we learned that Wayne Gretzky is now a winemaker. We enjoyed an early dinner of antipasta and pizza, snapped some photos of the lake, and made our way back for one last mesmerizing look at the Horseshoe Falls.

We woke up early on Sunday to the first sunshine of the weekend – of course we were leaving. Another delicious breakfast by Scott, and we were on the road. We went right over the Rainbow Bridge with no line at the border. The guard was gruff: “Nationality? What was the purpose of your trip?” he barked at us. Give us a break, man. Since we’d left early, expecting delays, we stopped over on the American side to see the falls again. That’s when we got all those lovely rainbow shots.

One regret was not being able to take the Maid of the Mist, the boat tour that takes you right out on the river to the falls, as it was still closed for winter. We were literally 3-4 days too early to do this, but hey, it’s a great reason to go back. What I’ll keep with me from this trip is the sheer power of Mother Nature, which was impressed on me most not by the glorious sight of all that water dropping, but by the incredible loudness of the sound it makes. Now I’ve not only checked a world wonder off the bucket list, but I’ve earned some good husband credits, which is always nice. 🙂