There’s been a lot going on recently! END_OF_DOCUMENT_TOKEN_TO_BE_REPLACED

We were up on “the island” for a few days over the Fourth of July, where friends of ours got married. Beach time, biking, lots of sun and fun. A really fantastic and memorable trip.

Congratulations to Nate and Diana, married August 11 in Cartagena, Colombia.

I have been meaning to write about our trip to Thailand since we got back a week ago, but just couldn’t find the will to sit down and get it all out there. I guess maybe I just wanted to bask in it a little longer before trying to sum it all up.

If I had to describe the whole experience in a word, it would be laughter. Put 50 old friends back together for 3 days and nights partying in celebration of a joyous event, and what you get is barrels and barrels of belly-laughs. Smiles plastered on for days. Aching stomach muscles and streaming tears.

We left on a Friday night and after 30 hours, 3 plane rides and a 90-minute taxi it was lunchtime on Sunday and we were on a blissful slice of beach called Khao Lak. Jarrett and Candice were there to greet us, and after we checked in we got changed and walked to a little family-run restaurant next door, where we could sit and look out at the endless sea while eating fish caught that day, slow-grilled in banana leaves and served with sweet and hot sauces for dipping delight.

After lunch we went down to the beach and went swimming in the warm, blue water. It felt like diving into a giant bath – a sauna. We laid in the sand and felt the warm sun on our faces. Later the sky darkened and he heard thunder, but were safely ensconced in our cabana by the time the storm rolled through.

The rains came once each day, but rather than dreading them, we welcomed their arrival. They offered a respite from the action, and some pretty spectacular lightning and thunder. But they never lasted long, and the evenings were free and clear for revelry.

It was a bit of a downer when we realized the rains were going to arrive at the time they’d planned the wedding ceremony – sunset. But Chris, Coley and Dan came up with an ingenious idea – they brought sand up from the beach, along with kelp and shells, and created a little circle of love for the happy couple to stand in while reciting their vows. And lucky me, I got to be the third pair of feet in that circle.

For my friends Jarrett and Candice had decided to bestow upon me quite an honor: they wanted me to marry them.

The idea cropped up about six months ago, I think, and at first I wasn’t sure if it wasn’t a totally hare-brained scheme. I assumed it was Jarrett’s idea, we having been close so long and him being my best man in China – so I reached out to Candice to make sure she was cool with this, because I know weddings are really about the brides. It’s her day. So I was really happy and humbled when she said they had decided this together.

The plan was vague for a while, but it was always assumed I would have something to say. For six months, I gave this nearly no thought whatsoever. I am a procrastinator by nature, and the weight of importance attached to significant events tends to make me procrastinate more. Also, every time I started to think about what to say, I would think about being back in boarding school with Jarrett – which I knew that no one wanted to hear about at a wedding. Plus I was always using a “best man” speech as my reference, and I had to keep reminding myself that the basis should probably be something closer to a sermon – or what have you.

Anyway, it turns out the day of the wedding I have written absolutely nothing. But I did do some preparatory work the night before. Candice’s grandmother was the oldest family member at the ceremony, and being the grandmother of the bride puts you in the role of matriarch. I had never met this woman, but I knew that she had hosted Jarrett and Candice at her home in Shanghai. I engaged her in conversation during the dinner party for fifteen minutes or so, introducing myself and complimenting Candice, and asking her opinion of Jarrett. When she said she really liked him, I knew I was golden for the speech. This woman speaks only Chinese, so I was also feeling very confident in my language abilities, like “I still got it!” But she was very kind.

The next day we did a run-through of the ceremony in the afternoon, on the beach, before it started raining, and then I took an hour back in my room to put some thoughts on paper. In the interest of preserving the historical record, here is what, to the best of my memory, I wrote:

Welcome to Thailand! And welcome to the wedding of Candice Lin and Jarrett Wrisley. We are all gathered here today to bear witness to the consummation of a love that has grown, through fits and starts, over the last five years.

There is perhaps no greater testament to the characters of these two individuals than the fact that so many friends and family traveled so far to be with them here, on their special day. Our friends Candice and Jarrett only had to ask, and we would not have missed it for the world.

Of all the guests here today, I would like to single one out in particular. Candice’s grandmother has hosted the young couple many times at her home in Shanghai, and she has had the opportunity to get to know the man courting her granddaughter. Last night she told me she was happy with Candice’s choice, because “Jarrett is a good man.” When you have grandma’s seal of approval, you must be doing something right.

Jarrett’s own grandparents are surely watching today’s ceremony from their own special seats, and I know that they would be proud to see their grandson and the beautiful, intelligent young woman he has chosen to be his wife.

The Lins and the Wrisleys have all expressed to me how happy they are to see this union, to know that these two wonderful families will be forever joined.

That wasn’t exactly how it went, though, because I got nervous at a few points and forgot my lines. The second time I blanked, I had to consult my notes because I just couldn’t remember my own name! I was lucky to have a very friendly crowd.

There were two poems read by Natalie and Michael, and then we did the vows, which was easier since I just had to read what they’d written out, remembering to project and enunciate. And they had some laughs built in there, which was nice.

I proclaimed them husband and wife “by the power vested in me by … my two good friends!” Cheering, kissing, smiling and weeping. It was truly, truly sweet and beautiful. 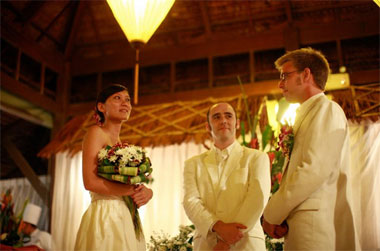